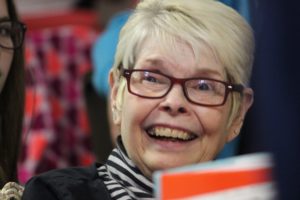 Today marks the 50th anniversary of Jonas Salk’s polio vaccine going nationwide, the beginning of the end for that paralyzing childhood disease in the U.S.

Judy Hoit, of Iowa City, was four years old when she was hit with polio in 1949, and the following year, she was named Iowa’s “Poster Girl” for polio, posing on a wicker wheelchair.

Five-and-a-half decades later, Hoit’s still in a wheelchair, with limited use of her limbs.

Several thousand Iowa children and tens of thousands nationwide were stricken by polio in the late 1940s and ’50s. Hoit vaguely recalls the onset of the disease.

She remembers the high fever and spending a full year in the hospital in Des Moines in a ward with many other polio-infected kids — and nine more years of surgeries, crutches, leg braces and rehabilitation. 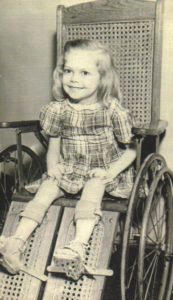 While polio was eradicated in the U.S. by the late 1950s, the disease is still thriving elsewhere.

A few years ago, Hoit took a trip to South Africa to visit a pen pal and while there, stopped by a school for disabled children.

Hoit says every kid in the school had been stricken with polio and all of them were using crutches and leg braces.

“It was like a flashback,” she says, remarking the U.S. is so lucky the vaccine was developed — but many countries still have polio and people must continue to be vaccinated for it or they’ll be afflicted.

The disease radically changed Hoit’s life, but she says she doesn’t like to dwell on the negative.

She’s invented and is marketing a device called “The Pakkie” to help more easily move people into and out of their wheelchairs.

Hoit is also state director of the Ms. Wheelchair Iowa program, which works to promote -not- the disabilities, but the abilities of people in wheelchairs.