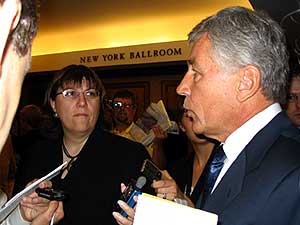 Nebraska Senator Chuck Hagel spoke to the Iowa delegation at the Republican National Convention this morning, delivering a speech which focused somewhat on the next four years of a potential Bush Administration, but Hagel did drop a few hints of Iowa ties he might exploit if he runs for President in 2008.

“I don’t pretend to have any direct lineage to all you influential people in Iowa, although I do have many, many cousins that live in Iowa…and of course being the shameless politician that I am, I call upon that connection all the time,” Hagel said as the Iowans laughed. “I don’t think any of ‘em are horse thieves. They’ve all paid their taxes.”

Hagel paid tribute to the role Iowa’s Caucuses have as the lead-off contest in the presidential selection process.

“How you put your imprimatur on the front-end of the process (is) absolutely important and it’s critical,” Hagel said. “I draw some sense of perspective from the fact that (the Caucus results) come from the Heartland.”

But afterwards, Hagel was cagey when reporters asked him about his aspirations for the White House. “I haven’t changed anything about who I talk to,” Hagel said. “If I’m invited to talk to the Iowa delegation or the New Hampshire delegation, I”ll do it.”

But Hagel did admit to a reluctance to any overt campaign-style speeches or events. “I think you have to be very sensitive to that,” he told reporters. “I’m a long way from making any decisions on what my political future is.” Hagel was re-elected to a second term in the U-S Senate in 2002.

Hagel was at ease behind the microphone during his speech, joking with the delegates on a variety of topics. But Hagel grew serious as he talked about the challenges of the four years ahead. And Hagel criticized the conduct of this year’s presidential campaign, not only lambasting the independent groups running critical ads but lambasting John Kerry and George Bush, too. Hagel, who is 59 years old, served in Vietnam, earning two Purple Hearts, before starting a brief career in radio. He’s been an investment banker, an entrepreneur, a lobbyist and he was appointed by President Reagan to be deputy administrator of the Veterans Administration