You are here: Home / Politics / Govt / Guiliani talks about 9/11; Romney talks about Rubes 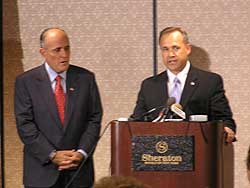 Two more potential presidential candidates of 2008 paid a visit to Iowa convention delegates this morning. The Iowans jumped to their feet the moment former New York Mayor Rudy Guiliani walked in the room. Guiliani didn’t give a long speech, and spent more of his time answering questions. All but one of the questions were about September 11th, and afterwards, Guiliani said that’s not unusual, even though New Yorkers think the rest of the country didn’t “feel” 9/11 the way they did.

”It’s really interesting because the impression often is just the opposite,” Guiliani said. “The impression is that we’re closer to it and people outside New York maybe don’t feel it as much, but I’ve found in traveling that it’s actually maybe just the opposite. I think that people outside New York do feel it quite a bit and this is something that isn’t just New York, I mean this affected all of America. They watched it. They saw it. It was catastrophic for all of them and you can’t imagine how many people have connections to it – a relative or a friend and then they don’t get to see day in and day out the recovery that’s taken place, so many people will come here from other places and actually be shocked that the people of New York have recovered as well as they have.”

Guiliani told reporters he’s not ready to talk about the ’08 race. “I don’t know what I’m going to do,” he said. “I have no focus beyond 2004 right now. The only two things I’m thinking about in the future right now are the Yankees getting themselves into the World Series and President Bush being re-elected.” And for you baseball fans, Guiliani said Bush’s re-election was more likely. The other potential candidate of the future to talk with Iowans was Massachusetts Governor Mitt Romney. Romney made sure the crowd knew he had spent time in Iowa, working as a consultant for a Marshalltown company.

”I spent probably two years flying into Des Moines and then driving, about an hour a little over an hour to get to Marshalltown and then we’d go out to dinner at Rubes,” he said, mentioning an infamous steakhouse where patrons are allowed to grill their own steaks.

“You know Rubes?” he asked the Iowans, who began nodding and ahhing. “Ah, yea, we know Rubes. And so I feel like I know at least a corner of Iowa because I spent so much time there in Marshalltown and then over in Ames and back in Des Moines. And I know there are a lot more republicans in Iowa than there are in Massachusetts.”

Romney, who was head of the 2002 Olympics in Salt Lake City, spoke for about 20 minutes, and spent a few minutes attacking democratic presidential candidate John Kerry for flip-flopping.

“He’s conflicted on so many issues he sounds like and actually is a person incapable of coming down firmly on one side of a key issue,” Romney said.