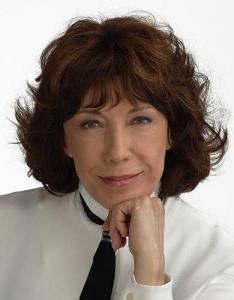 A woman who’s been entertaining audiences from the stage, TV and big screen for nearly four decades is bringing her one-woman show to Iowa for one performance tonight (Thursday). Lily Tomlin is known for a host of roles — from “Laugh-In” to “Nine to Five” to “The West Wing” and she’ll provide glimpses into her many unusual characters.

The 66-year-old Michigan native bills the show as “an evening of classic Lily Tomlin ’cause I do a wide-ranging assortment of what I’ve done over the years and characters that are classic and characters that have stood the test of time.” Tomlin is recognized for some of the television icons of the late 1960s — the nasal telephone operator Ernestine, the little girl on the big rocking chair Edith-Ann, and others like Mrs. Beasley, Sister Boogie Woman and Madam Lupe. Tomlin says she never tires of putting on the familiar faces and voices.

In an interview with Radio Iowa from New York, Tomlin says “As long as you put something in the characters’ mouths that is relevant and relates to the audience and evokes laughter and a response, they live on.” She laughs and says “Just like a good Chanel suit that you hang in the closet, if you get it out and brush it up and accessorize it, it’s gonna’ be just as snazzy as ever.” Tomlin plays a recurring role as the president’s secretary on T-V’s “West Wing,” and she’s just finished shooting a movie based on the long-running Midwestern radio show “A Prairie Home Companion,” due for release next year.

Tomlin and Meryl Streep play sisters who are a country music singing duo.
She says the fictional Johnson Girls have been singing since they were kids and had once applied for a job on the Lawrence Welk Show and didn’t get the job, “and my character’s still a bit bitter about it 50 years later.” Tomlin’s one-woman show is tonight at the Des Moines Civic Center.