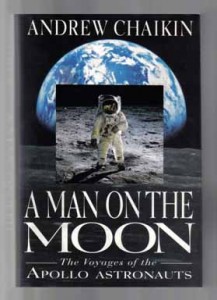 One of the nation’s leading writers on space exploration is hosting an event in central Iowa today to discuss the future of America’s space program. Best-selling author and former NASA employee Andrew Chaikin has done in-depth interviews with all 23 surviving Apollo astronauts and says he was bitten by the space bug early.

Chaikin says, “I grew up with the space program. I was 13 years old when Neil Armstrong and Buzz Aldrin walked on the Moon and of course I was glued to the television set with my maps of the Moon and models of the spacecraft I had built and all kinds of source materials I had gathered to create my own little mission control in the den.” Chaikin spent nearly a decade researching and writing “A Man on the Moon,” the book upon which the Emmy-winning HBO miniseries “From the Earth to the Moon” was based.

He explains his motivations for that challenging endeavor saying, “I wanted to be able to read a book that would make me feel like I was in the spacecraft with them, that I was in a spacesuit myself standing on the surface of the Moon accompanying them on those moonwalks. So I set myself with what seemed at times like an impossible mission, which was to interview all of the astronauts who went to the Moon, collect their stories and weave them into a narrative that would really make you feel like you were taking part in these missions.”

Looking ahead, Chaikin is confident NASA will return to the Moon and springboard on to sending people to Mars. He says the space agency operates with a budget that’s much smaller than most people think — about seven-tenths of one-percent of the national budget. He says “With that money, they are going to create an infrastructure in space, a whole system of spaceships that can be used again and again, to take humans beyond low-Earth orbit for the first time since 1972 which was when we flew the last Apollo mission.”

Chaikin’s next book, “A Passion for Mars,” is due in the fall of 2007. Today, he’s leading three interactive programs at the Science Center of Iowa, in Des Moines. For more information, surf to www.sciowa.org or www.andrewchaikin.com.