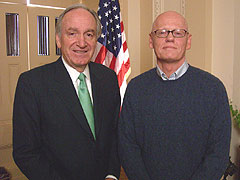 A northwest Iowa corn farmer was "in the House" last night as President Bush outlined a new push for ethanol. Craig Brownlee of Emmetsburg was Senator Tom Harkin’s guest at the president’s State of the Union address in the U.S. House.

"That was a big number the president announced — some people think almost unreachable, but I don’t," Brownlee says. "I think the farmers will respond and grow corn, use our residue as stover and I think we can get there." Corn in the Emmetsburg area has been selling in the range of $3.50 a bushel because of the ethanol plant there. "It’s a Broin plant, one of their 20-some plants…and I think it’s going to be the very first pilot plant for (using) cellulose (to produce ethanol) in the country of any size," Brownlee says. Brownlee acknowledges livestock farmers have worries about the growing use of corn in ethanol production.

"That is an issue. I’m sure they’re feed expenses will go up," Brownlee says. "It will hurt, I think the hog and the cattle industry some but I guess it remains to be seen how much." President Bush called for a new federal goal that would see the U.S. produce 35 billion gallons of "renewable fuels" like ethanol and biodiesel by the year 2017.

Craig serves on the board of directors for Voyager Ethanol in Emmetsburg, the plant that will be converted to making ethanol from the entire plant, not just the kernels of corn. Brownlee says ethanol production is producing "boom times" in agriculture that will be more sustainable than the financial surge that happened in agriculture back in the 1970s — which was quickly followed by the Farm Crisis in the 1980s.