You are here: Home / News / Iowa Guard soldier dies on mission to help others 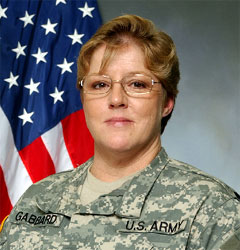 An Iowa National Guard soldier has died while on a mission to help others. Forty-six-year-old Command Sergeant Major Marilyn Gabbard, of Polk City, died along with 11 others in the crash of a Blackhawk helicopter in Iraq Saturday.

Iowa National Guard spokesman, Lieutenant Colonel Greg Hapgood, says Gabbard, who was born in Boone, joined the Iowa Guard in October of 1979 as a private, and went on to make history.  Hapgood says Gabbard was the first female Command Sergeant Major in Iowa Guard history, and the first female Iowa guardmember to die in combat.

Hapgood says Gabbard was stationed at Camp Dodge in Johnston and her mission in Iraq was to help other soldiers. He says Gabbard had a great deal of experience in helping soldiers through various issues they faced while on active duty, and that’s why she was on the team that went down in the helicopter. The others who died in the crash were from guard units in other states. Hapgood says they still do not have all the details of what caused the helicopter to crash.

Hapgood says Gabbard’s position was key to all soldiers, and she touched nearly everyone. Hapgood says it’s very telling when people describe Gabbard, “That she was a totally selfless person. That it was always the organization’s needs about herself. There wasn’t something that would come up that she would say ‘Why’, she would say ‘Why not’ She was someone you gave a project to and you knew it would be done, and you knew it would be done right.”

Although she rose to the highest non-comissioned rank, Hapgood says Gabbard credited others for success. Hapgood says Gabbard was always quick to credit her soldiers when things went right, and never took credit herself. “She will be extremely missed by so many people in this organization,” Hapgood says, “and she was just a superb person.” Gabbard is survived by her husband Edward, a retired Iowa guardmember, one daughter, five step-daughters and one stepson. Funeral arrangements are pending.