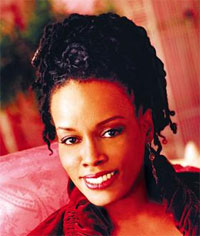 One of America’s top jazz singers, whose voice set the mood for one of the best films of 2005, will perform in Des Moines next weekend. Dianne Reeves sang 14 of the 15 songs on the soundtrack to "Good Night and Good Luck," which won her the Grammy for Best Jazz Vocalist last year.

She’s won the trophy three consecutive years, the only artist ever to do so. Reeves hesitantly admits it’s a huge accomplishment: "Yeah, it is, I guess, (laughs) but you don’t really think about that. You just think about doing the music and the performances and hopefully moving forward and growing." She and her small combo — drums, piano and bass — will play at Drake University’s Sheslow Auditorium February 17th. [Tickets available from the Civic Music Association ]

Reeves says "We’ll be doing a lot of new music, some music that I’ve recorded in the past and music from ‘Good Night and Good Luck,’ the film." Reeves is referred to in publications as "perhaps the preeminent jazz vocalist in the world today" which she says is an accolade that’s a bit daunting.

Reeves says "Yeah, but I don’t ever think about that. I just think about, well, people always put all kinds of titles and things on you. I think the most important thing is stay the course and be a part of the journey." Reeves not only sang the soundtrack for the movie, which earned six Oscar nominations, she was also featured on-screen throughout the film. The 50-year old says she’s open for more movie roles, if the opportunities present themselves.

As for the hugely-popular soundtrack to "Good Night and Good Luck," Reeves says director/actor George Clooney handpicked each song she sang. Reeves says "Well, yeah, because in the film, they’re very much a part of the storytelling of the film. So it makes sense that he would because they’re kinda’ like the singing dialogue of the film or the Greek chorus of the film."

The movie chronicles legendary journalist Edward R. Murrow’s 1954 confrontation with then-powerful Senator Joseph McCarthy.In the six months of the year she’s not on the road, Reeves enjoys cooking and gardening at her home in the Colorado mountains.