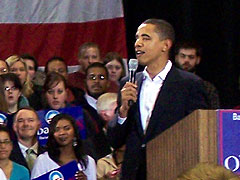 Illinois Senator and Democratic presidential candidate Barack Obama was in Iowa Sunday, declaring that he will win Iowa’s Caucuses.

Obama spoke to over 5,000 people gathered at Hilton Colesium in Ames [ Larger image ]. Sunday’s stop came the day after Obama formally declared he’s running for president. Obama outlined his biography for the crowd and launched into a speech that touched on the same themes he raised in speeches before the fall election, including his September stop at Senator Tom Harkin’s annual steak fry. “It seems as if politics has become a business instead of a mission, that power in Washington is always trumping principle,” Obama said Sunday in Ames. “We’ve got a lot of so-called leaders who don’t do much leading.”

Many of the Ames crowd’s loudest responses came when Obama challenged President Bush’s actions on Iraq.  “We ended up launching a war that should have never been authorized and should have never been waged and to which we now have spent over $400 billion and have seen over 3,000 lives of the bravest young Americans wasted,” Obama said.

Obama said he and the rest of the country “revere” the military and he would, as president, deploy troops as necessary to defend the United States. “We also understand that ultimately our security is going to depend not just on our military might but the strength of our diplomacy and the power of our alliances and the degree to which we can help spread out ideals and our hopes and our dreams around the world,” Obama said, as the crowd applauded. “We know these things.”

Obama said for change to occur on U.S. policy in Iraq and a whole host of other issues — like health care — the common citizen must “shake off their slumber” and “set aside the cynacism” and get involved in politics.

During an interview afterwards with Radio Iowa, Obama said the American public has “good cause” to be angry about Iraq, but he added a caveat. “I think it’s true that Democrats still have not yet won over a consensus of the country that would allow them to lead forcefully on some of these issues,” Obama said. “That’s, I think, the job of the next presidential candidate and the next president.”

Obama is running behind New York Senator Hilary Clinton in polls conducted nationally and in Iowa, the state that will host the first electoral test in the presidential campaign. “I don’t plan to lose Iowa so I don’t even have to consider what’s next,” Obama said. “We are confident that if we do what we need to do and work hard here, we’ll do just fine.”

About 200 people crowded into a home in Iowa Falls on Sunday morning to mee4t with Obama.  After a 15-minute speech, Obama answered questions for almost half an hour. “I think we’ve got to be as careful getting out as we were careless getting in,” Obama said in response to a question about Iraq.

On Saturday, Obama made stops in Cedar Rapids and Waterloo.

[ More on Obama’s trip to Iowa at The Blog ]