You are here: Home / Recreation / Entertainment / Luther grad stars in Phantom of the Opera 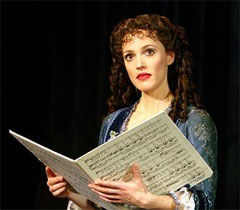 A graduate from a small northeast Iowa college is starring in the touring Broadway production of "The Phantom of the Opera" on stage in Des Moines. Sarah Lawrence is in her fourth year on the tour that’s taken her from Tornoto to Philadelphia to Washington D.C. and many other far-flung cities. The Wisconsin native got her music degree at Luther College in Decorah and is thrilled to be back in the Midwest.

"My professors have been coming to see the show and my roommate, who lives in Cedar Falls. It’s been fun to be here and get back in touch with so many people from Luther. It feels like home." Lawrence is the permanent alternate for Christine, the lead female in Phantom. She performs two shows a week and is on stand-by for emergencies.

Lawrence says: "We have an understudy who’s in the chorus who is doing her chorus role eight shows a week and if something happens during the show, she would go immediately into the role of Christine, but I have to be nearby within ten or 15 minutes in case that happens and they want me to come over and be in the theatre." She grew up near Madison, Wisconsin, but says both her parents were Luther College grads and she developed a love for the school early on.

Lawrence says "I’m the fourth generation of people in my family who’ve gone there so it was definitely part of my life growing up. We’d go to homecoming every year and we’d hear the choir singing whenever it was near us on tour or I’d hear them on campus when my parents brought me there. I wanted nothing more than to sing in the Nordic Choir and go on tour with them and that’s what I did."

The tour’s already booked well into 2008 and someday when Lawrence leaves "Phantom of the Opera," she says she’d like to sing "real" opera full-time. The show is at the Civic Center of Greater Des Moines through Sunday.