You are here: Home / News / Romney: failure in Iraq would lead to unraveling of Middle East 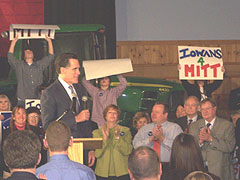 Romney spoke for just over half an hour to a group of about 200 Republicans gathered in the tourism building on the state fairgrounds. "Boy, it may be cold outside, but it sure is warm here," Romney told the crowd as it chanted his name.

Romney briefly laid out his personal biography, but then launched into a discussion of Iraq. Romney said if Iraq is not stabilized by the additional U.S. troops being sent into Baghdad and another province where violent attacks have escalated, "millions" may be killed in a "massive, full-out" civil war.

"Let me take just a minute and talk about our troops in Iraq. Boy, we want them home. Every person in this room wants them home," Romney said. "…But as we think about bringing them home, we also have to recognize the risks associated with what we’re facing there."

Romney also warned al Qaeda would try to establish a "base for terror" in northwest Iraq, Iran would try a land-grab in the south, and things could unravel throughout the Middle East if Iraq’s government falls. "Unless we manage this properly, there is a significant risk that the impact on American lives and the need to send American troops back there in even larger numbers could occur…despite how badly we want all of our troops to come home right now we don’t want to send more later and lose even more lives," Romney said. "With that in mind, I support the president in his effort to stabilize…Iraq and to bring success as long as there’s a reasonable prospect of that occurring."

As for Iraq’s neighbor, Romney said Iran must not be allowed to possess nuclear weapons. "We’re going to have to lead all of the civilized world to say: ‘We will not accept that course," Romney said. "It’s critical."

Romney said only moderate Muslims will be able to reject the international jihad being waged by "extremists."

"We’re going to have to look to the Muslim world and recognize that we, I believe, should lead a partnership of all the nations of the world that are willing to join with us to help move the world of Islam to support moderate, modern governments and modern people and help them embrace modernity, so that they can reject violence and the extreme," Romney said.

Romney, the son of a former Michigan governor, served one term as governor of Massachusetts who managed the Winter Olympics in Salt Lake City.  He formally kicked off his bid for the Republican party’s 2008 presidential nomination with a speech this morning in Michigan.