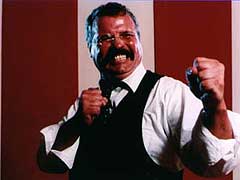 A presidential impersonator will be in eastern Iowa this weekend to celebrate President’s Day at the Herbert Hoover Presidential Library and Museum . Ted Zalewski has spent more than two decades portraying Teddy Roosevelt, America’s 26th president, who served from 1901 to 1909. Zalewski says he didn’t consider becoming a presidential look-and-act-alike until he visited Roosevelt’s home in Oyster Bay, New York.

In addition to his political career, Roosevelt was a cowboy, soldier, naturalist, historian and father. Zelewski says his presentation in West Branch will be a combination of history, drama and fun detailing Roosevelt’s youth and rise to the presidency.

Zalewski says "It’ll be about an hour in length. It’s a very intense, dramatic, vigorous performance. You’ll get a good picture of what Teddy was like. Many of the words are his own words. Teddy never rested, from morning until night, he was on the move and this shows there’s an intense, driving explosion of energy." The performance is slated for Sunday, February 18th, at 3 P.M. For more information, call 800-828-0475.