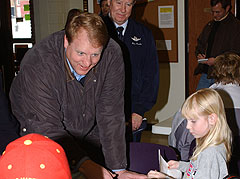 Governor Chet Culver toured parts of Iowa on Monday, from the ground and the air, getting a first-hand look at areas damaged by the weekend winter storm. Culver is waiting to get damage reports from Federal Emergency Management Agency officials before seeking federal assistance and says it’s too early to put a dollar figure on the damage.

Culver says "Given the fact FEMA is actually on the ground now suggests they really appreciate and understand the magnitude of this storm." At a stop Monday night in Cedar Rapids, the governor said he’s declared 60 of Iowa’s 99 counties disaster areas. Culver says FEMA officials will soon give him a detailed report and an indication of how much federal assistance he should seek.

Culver says the cost of this storm will far exceed damage caused by the floods in 1990, when costs soared into the millions. He says over 200 National Guard members are providing support in different pockets of Iowa, mostly assisting with generators for city water systems. Twenty-eight Iowa Guard Armories are serving as back-up shelters in communities across the state.