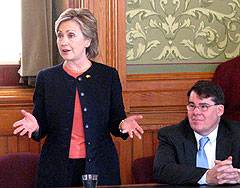 New York Senator Hillary Clinton is touring the research facilities at Pioneer Hi-Bred at this hour, emphasizing her recent call to dedicate more federal resources to the production of ethanol using the entire plant, not just the kernels.

Clinton also wants a new federal agency to focus on energy projects. "A research agency similar to one that was started after Sputnik went up called DARPA which stands for the Defense Advanced Research Projects Agency," Clinton said this morning during an interview with Radio Iowa. "It was out of that agency that we had inventions like the Internet."

According to Clinton, that agency — back in the 1950s and ’60s — focused primarily on the space race and projects for the U.S. military. "The best minds in our country looking at the problems that we confronted back then. We had results that we could have never predicted," Clinton said. "I believe if we did something similar to that with energy, we would just open the door to the innovation of the American spirit and I’d like to see us do that."

Pioneer just received a grant from the U.S. Department of Energy to finance some of the company’s research into "cellulosic ethanol." Clinton said that’s the kind of action the federal government should be taking. "It’s just that I believe we have to do much more than the Bush Administration is willing to do," Clinton said.