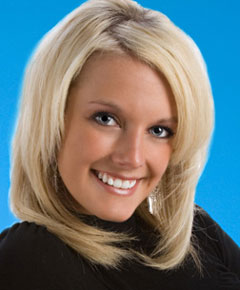 Miss Iowa USA leaves for Los Angeles Thursday for two weeks of rehearsals prior to the nationally-televised competition for the crown later this month. Twenty-one-year-old Dani Reeves is a native of the southwest Iowa town of Hamburg and says she’s going a little crazy trying to prepare for the biggest night of her life.

Reeves says "I’m constantly picking up things when I’m at the mall. It’s a never-ending process of what you need. I think I’ll be throwing things in my suitcase ’til the morning I leave on Thursday." The Miss USA Pageant will be carried on NBC on March 23rd and Reeves says she’s ready for it all to get underway right now.

She says "I’m very nervous. I’m not sure really what to expect. It’s going to be an experience. I’m really excited, especially to get out of all of this snow and get into sunny California." The six-foot-tall blonde has taken a year off from school at Western Iowa Tech in Sioux City, where she’s studying pre-med. She knows her life could take a drastic change in a few weeks if she’s crowned Miss USA.

She says "If I win, they will actually put me up in New York at a Trump Tower apartment and then I would be traveling the world, so that’d be a lot of fun. If I don’t win, I still plan on traveling around Iowa and doing different charity work and meeting all kinds of interesting people." Reeves’ platform focuses on breast cancer awareness.