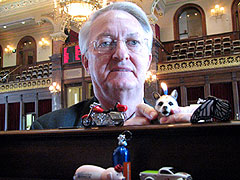 One state senator tried to — rhetorically — light a fire under his colleagues this morning. Senator Dennis Black, a Democrat from Grinnell, is trying to outlaw "novelty" cigarette lighters, as he says their different shapes and styles too often appeal to children. According to Black, about five children die in Iowa each year in a fire they started themselves with matches or a cigarette ligther.

To prove his point, Black stood on the floor of the Iowa Senate and gave his colleagues a demonstration. "Look at this neat gun I’ve got," Black began, then he flicked the lighter. "See the fire coming from it?"

Next, Black held up a lighter in the shape of an animal. "What little girl wouldn’t not love to take this…furry little frog with fire shooting out of its head to bed with them and thinking mom and dad don’t know pull the covers over their head?" Black asked. That lighter made the sound of a frog — "ribbett, ribbett" — as the flame appeared.

Other senators started to chuckle, though, when Black flicked a third lighter that was in the shape of a butterfly. "And I just burned myself again. Again!," Black said. "…It’s really not funny. It truly is not. It is not funny one iota when we lose six children a year. I have a bill that would take care of this and you continue to laugh…My point is, I want to save kids."

Black ended his two-and-a-half-minute-speech with a final plea for a ban on novelty cigarette lighters. "This is bad business. We need to stop it," Black said. "It will save lives."

The bill must clear a senate committee this week or it will be permanently tabled for the year. You can hear Black’s entire statement by clicking on the audio link below.