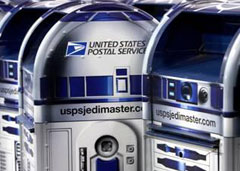 Four official U.S. Postal Service mailboxes in Iowa were replaced overnight with new mailboxes that resemble a famous robot. R2-D2 first appeared in the original "Star Wars" movie, released 30 years ago this summer. Postal Service spokesman Richard Watkins says the familiar silver-and-blue android, or "’droid," is shaped a lot like a mailbox, so it was a perfect fit for the promotion.

Watkins says: "We’re encouraging people not to tamper with them. That is a security issue somewhat because when people see these, they’re going to want to take them home, but of course they are standard U.S. Postal Service-issue mailboxes to collect mail." The special mailboxes were installed in the past day nationwide.