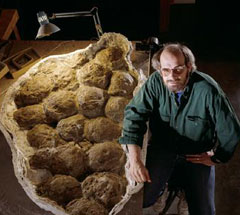 One of the world’s top fossil hunters will be in central Iowa this week, not to search for dinosaur bones but to spark interest in more kids. The movie "Jurassic Park" inspired thousands of young people to pursue careers in paleontology. Filmmaker Steven Spielberg’s inspiration for the lead character was Jack Horner, who says it is an exciting field, but unlike in the movies, it’s rooted in academics, research and studying the ancient fossils.

Horner says,"By doing careful investigation of the rocks we find (dinosaurs) in, we can oftentimes determine some of their, or at least hypothesize, some of their behaviors." Horner is curator of paleontology at the Museum of the Rockies in Bozeman, Montana, and he’s a Montana State University regents’ professor of paleontology. Horner’s giving lectures Friday and Saturday at the State Historical Museum in Des Moines.

Horner says, "I’m going to talk about dinosaur behavior, a lot about their nesting and their growth and how we figure out dinosaur behavior since, you know, dinosaurs are just a bunch of skeletons." The Des Moines facility has a new exhibit "Hatching the Past," explores the life of dinosaurs through their eggs and nests. One of the most infamous dinosaurs is the Tyrannosaurus Rex, which Horner says is the subject of much debate, from how the T-Rex stood and moved to how it looked and whether it was truly a ferocious hunter, as depicted in the movies.

Horner says: "As far as T-Rex feeding habits, that’s controversial and is one of the subjects I talk about. People ask me a lot about it because I’m the proponent of T-Rex being a scavenger. I base that on lots and lots of evidence." There will be a showing of "Jurassic Park" at the museum on Saturday with a special introduction by Horner.