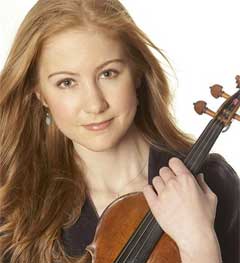 A teenage violin virtuoso who is considered a rising superstar in classical music makes her Iowa debut next week, on Friday the 13th, though she’s not superstitious. Caitlin Tully debuted with the Vancouver Symphony at age ten after being captivated by the violin at four.

Tully says: "I actually heard it on the radio. I think it was Sinatra and the orchestra was in the background. I just fell in love with the sound of the instrument. And I don’t sing very well so they thought I wasn’t musically-inclined."

Now at 19, she’s a student at Princeton University, studying under violin geniuses like Itzhak Perlman and taking time off to play everywhere from Pittsburgh to Paris. She’d asked for a violin for Christmas when she was four — but her parents were hesitant.

"They didn’t actually get it for me for Christmas," Tully says, "they got a keyboard which I got kind of angry about, but they gave (a violin) to me for my fourth birthday and I started. At least for the first couple years, it was actually kind of like playing Lego (blocks) or something, you just go play violin all afternoon."

She was born in Connecticut, raised in Canada, then transplanted to Texas where her dad is head of the history department at the University of Texas. At Princeton, Tully says she tries to lead the life of a typical student, between world tours.

Tully says: "I do have normal hobbies. I love to make jewelry and I love to go run. And certainly there are times when you go over to your friends’ suite and you just kind of hang out and there are these college hanging out times which are really just pretty cool."

As for personal musical tastes, her i-Pod is loaded with songs from Beethoven to the Back Street Boys. Tully says, "I love Simon and Garfunkel and the Dixie Chicks are good. I even listen to classical music some. But the truth is, I like being quiet. I think when music is such a big part of your life, there are times when you just don’t want to hear some."

Tully is to appear Friday, April 13, at 8 P.M. at Drake University’s Sheslow Auditorium in Des Moines.