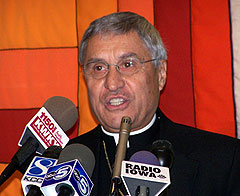 The Bishop of the Des Moines Catholic Diocese announced his retirement today. Sixty-seven-year-old Bishop Joseph Charron says he decided to retire early due to a medical condition that makes it tough for him to do his job. Charron says, "My decision did not come lightly or quickly."

Charron says it is an "up and down thing" where he feels well on one day and another day he begins to hurt. Charron says the pain comes in his shoulders, knees and hips. Charron is taking medication, but says doctors advise the condition could get worse if he does not take care of it. Charron says his personal doctor recommended retirement, and he then consulted with doctors at the Mayo Clinic in Rochester, and other priests before deciding to retire.

The Des Moines Diocese covers the southwest corner of Iowa, but Charron says the travel was not a problem. Charron says the diocese has been "rather easy to get around" as his longest trip is only about two hours or two hours and a half.

Charron been the Bishop of the Des Moines Diocese since 1994, and says he will miss being with people, and Charron says he has a special place in his heart for the young people. Charron says giving up attending confirmations across the diocese this year was very tough. Charron says he is not going away and there is a lot he can continue to do in the diocese.