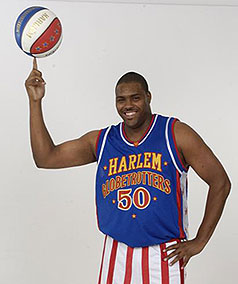 Just about everybody’s heard of the Harlem Globetrotters, but few may realize the team’s incredibly longevity, as they hit the boards in Iowa this weekend. Thirty-two-year-old Kentucky native Otis Key is starting his tenth season with the touring ambassadors of basketball — a team that’s been touring every year since 1926.

Key says: "Yeah, 81 years, that’s a long time and it’s quite a treat when you have a sports team, especially an independent basketball team, that’s been around that long. Everywhere you go, you’re loved, you win every night, it can’t be better."

Key admits, they don’t win every night. Over the eight-plus decades, the Globetrotters’ record is over 22,000 wins and some 345 losses. Key, who played college ball at Missouri’s Lincoln University, says they do a lot of living up to their name, trotting around the globe much of the year.

Key says they’re on tour from December through April across North America, then there are the international tours and the summer camps, the military tour in the fall, and then it starts all over again. Key’s played in 27 nations as a Globetrotter, wearing the signature blue jersey and red-and-white striped shorts. He was recruited to join the team right out of college and while he had the basketball skills, he says it wasn’t a big stretch for him to learn the skits and humorous bits that make the team so popular.

He says, "A lot of it’s just practice. You want to perfect your craft and we work hard at it. We spend three hours a day on it, so you really want to practice and perfect what you do." And while he did have the ability to twirl a basketball on one finger before joining, Key says it’s not a requirement to be on the team– but kids they visit in hospitals the week before a game usually make the request to see the move.

Over the years, the Globetrotters have played in 118 countries on six continents before 125-million fans. They’ll add a few thousand more with Sunday’s game at Wells Fargo Arena in Des Moines.