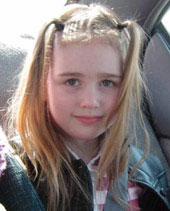 The mother of a five-year-old Floyd County girl who was abducted and killed in 2005 has once again lost a legal battle to regain custody of her two sons. A Floyd County District Court judge ruled in February against Noel Miller continuing to have parental rights for her two young sons, and now the Iowa Court of Appeals has affirmed that decision.

The boys had been in foster care since July of 2005 when their sister Evelyn Miller (pictured) disappeared from their apartment near Floyd. She was found dead a few days later on the banks of the Cedar River. The Court of Appeals in their decision says the district court properly ruled to take away Miller’s parental rights, saying the children would be at risk of harm if returned to their mother.

The father of the boys, Casey Frederiksen, signed away his rights to his sons as he is serving a 14-year prison sentence for child pornography.