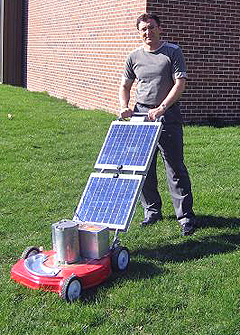 And, like the grass it mows, the UNImower is very green. Pecen says it uses no gas or oil and spews no emissions. Pecen says every weekend, 54-million Americans mow their lawns and use some 800-million gallons of gas per year. He says an EPA study finds all of that mowing using two-stroke engines causes about nine-percent of the air pollution nationwide.

The UNIMower, he says, is very eco-friendly. Pecen says two silver solar panels are mounted on the mower’s handles. Pecen says the mower would need to sit in the sun for about six hours to charge and then would be able to run for about an hour, long enough to mow the average home’s yard. He says the prototype cost about $1,800 to build but he hopes they’ll eventually be able to mass-produce them for a price that could rival traditional mowers. Pecen says UNI hopes to make the mowers “commercially viable.”