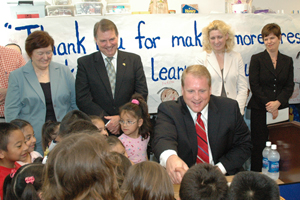 Governor Chet Culver has signed a bill into law which plugs 60 million more state tax dollars into an effort to expand preschool programs in Iowa. Culver went to a preschool near the statehouse in Des Moines and, as a class of four-year-olds looked on, Culver signed the bill.

Bill backers say the ultimate goal will be to have state support of preschool be tied to the allotments for Iowa’s K-through-12 public schools. Culver says only five percent of Iowa’s four-year-olds have access to a quality state-supported preschool program. "Two days ago, my daughter, who is six, read her first book to Mary and me," Culver told the crowd. "…She was only able to do that because she was fortunate at a very young age to get into a couple of great early childhood education programs."

Culver says for generations Iowans believed that education began with kindergarten. But, according to the governor, the latest research shows 90 percent of a child’s brain development happens before they set foot in a kindergarten classroom. "(That) fact requires us to reassess our public policy and invest in our kids at even an earlier age," Culver says. Shannon Cofield, president of the United Way of Central Iowa, calls today "historic."

"We do know that a child’s brain development is fastest in the early years when public spending in education is at its lowest," Cofield says. "United Way and our community partners have identified quality early learning as one of Iowans most urgent priorities." According to Culver, "terrific progress" was made during the 2007 legislative session on boosting preschool programs in Iowa and providing Iowa school teachers with a pay boost.

"Iowans children hold the keys to our future," Culver says. "The work we have done to improve education this year has laid a very solid foundation for our kids and young adults." Culver has not yet acted on about 100 bills passed by the legislature. The governor has until May 30th to either sign or veto each of those bills.