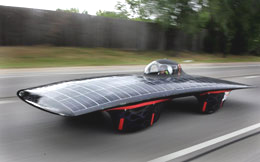 As gasoline prices in Iowa again hover at the three-dollar mark, Iowa State University’s solar car team is touring the state to promote its streamlined, silver vehicle and the use of the sun to power our vehicles.

Sarah Kelly, an ISU senior in mechanical engineering from Rochester, Minnesota, is traveling with the team and the sleek car named Fusion . Kelly says: "We go to schools and community centers and to a few museums just to show them what we’re up to at Iowa State and show them the alternative energy ideas we’re coming up with, just get the message out about the alternatives we’re using for transportation right now."

Fusion is the car ISU students raced in the 2005 North American Solar Challenge, running some 25-hundred miles from Austin, Texas, to Calgary, Alberta, Canada, in about 72 hours. Fusion placed third in the race’s "stock" class.

Kelly says they’re almost done designing the new solar car they’ll use in the 2008 edition of the race. Kelly says: "It’ll be pretty similar except one big rule change is that the driver has to sit more upright. If you’ve ever seen our car, it’s very flat and has a very low profile. The next car has to be a full foot taller than this one so, it’s a new aerodynamic challenge for the team." She says the team has been all over Iowa this week, hauling the car to elementary, middle and high schools.

Kelly says, "They love it. They think it’s really cool looking. We like to show it off to them because they haven’t seen anything like it. They don’t realize you can drive down the road all day without using any gasoline." Stops today include Muscatine and West Burlington with stops Friday in Keokuk and Ottumwa.

Besides generating interest in solar power, Kelly says they’re also trying to inspire financial backers, as the team hopes to raise 150-thousand dollars in cash and more than 250-thousand in contributions of aluminum, carbon fiber, Kevlar and other materials.