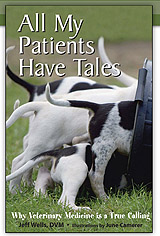 An Iowa native is returning to his home state this weekend to promote his latest book about the humbling and humorous experiences he’s had as a veterinarian. Dr. Jeff Wells is a Fairfield native and an Iowa State University grad who now practices in Colorado. Wells’ book is called " All My Patients Have Tales , " and that’s  tales spelled T-A-L-E-S.

Wells says: "Most of the book is about my first couple of years of practice when you graduate and really don’t know anything. You think you do, but you don’t. So it’s kind of the funny things that occur in that situation." Wells has taken care of large livestock and small housepets. When he first started work as a vet in South Dakota, a farm couple called on Wells to cure their sick puppy.

Wells says, "It was constipated. We would X-ray it. We couldn’t find anything. Finally we had to break down and start doing enemas on this dog. This puppy had eaten so many grasshoppers, it was just packed full of grasshopper parts. That was not a fun thing to get out of a dog, let me tell you." He says he was also called out to a farm where a cow was in the process of giving birth and it was running around loose with the calf hanging half-way out.

Wells says: "I threw the rope out and the darn thing literally stuck its head in the rope, which seems good, but the bad part about that is, now you have an 18-hundred-pound cow on the end of a rope and no where to tie it up. So with each step I’d take, I’m taking three steps, just flying through the air and being 28 years old, there was no way I was going to let go of this cow."

The story has a happy ending, at least for the bovine. Wells will be signing copies of his book Saturday at 10:30 AM at University Bookstore in Ames, and at 6 P.M. at Barnes & Noble in West Des Moines.