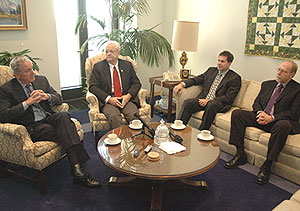 The two newest members of the Iowa Congressional delegation voted against the Iraq war-spending bill. First District Congressman Bruce Braley, a Democrat from Waterloo, voted against the bill and issued a statement saying "The American people and the people of Iowa have demanded a new direction in Iraq. That’s why I cannot support legislation that excludes a reasonable timetable for redeployment, effectively writing the President a blank check to continue his failed policy in Iraq.

Braley’s statement says he will continue to push for a bill that fully funds our troops and includes a timetable and tough accountability standards for President Bush and the Iraqi government to follow.

Second district Representative Dave Loebsack, a Democrat from Mt. Vernon was the other no vote. Loebsack issued this statement: "Like all Iowans, I support the men and women in our military. As a member of the House Armed Services Committee, I work everyday to ensure our troops receive the support they deserve in service and at home. Unfortunately, this bill would allow the President to send troops to Iraq and Afghanistan without full training, proper equipment, and the necessary rest period required between deployments. Over the course of the past five years, President Bush has mismanaged this war and stubbornly refused to listen to advice or accept the reality on the ground in Iraq. Congress can no longer continue to give President Bush unchecked authority. We need real timelines and real accountability.

Loebsack says he will continue to "do all I can to ensure Congress holds President Bush and the Iraqi government accountable with real benchmarks and real timetables."

Democrat Senator Tom Harkin, a leading critic of the President’s Iraq policy, voted for the bill. Harkin issued a statement saying he voted for the bill because it addresses critical domestic needs, including increasing the federal minimum wage and funding for the Department of Veterans Affairs. Harkin says he still supports a timetable for withdrawing troops from Iraq, and says there will be fresh opportunities to seek the votes to get a timetable passed.

Senator Chuck Grassley, Representatives Steve King and Tom Latham, all republicans, voted for the bill, along with Democrat Representative Leonard Boswell. President Bush is expected to sign the bill this afternoon.