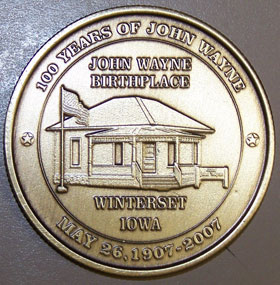 The centennial celebration of actor John Wayne’s birth continues today in Winterset. The home where Wayne was born was purchased in 1980 and opened to the public. David Trask, chair of the John Wayne Birthplace Society, and says though Wayne left the state as a child, it’s still important to honor him.

Trask says Wayne was "born and bred Iowan" as his mother was from Knoxville and his father was from Indianola. The Wayne family spent time in Keokuk, and his father owned a drug store in Earlham, where the family lived before moving to California. Trask says Wayne’s son Pat recently recalled how his dad sought an appointment to the Naval Academy, and then went to U-S-C to play football when the appointment didn’t come through.

Wayne got injured in his sophomore year and lost his football scholarship. He then got a job as a stagehand, which led to some bit roles in movies. Trask says Wayne’s story is one of someone who grew from simple Iowa roots to success.

Trask recalled how Patrick Wayne thought it was funny how fate worked for his father. Wayne said if his dad had gone to the Naval Academy, he thinks his dad would eventually become Chairman of the Joint Chiefs of Staff of the military, because he was driven to succeed. Wayne says his dad was at the top of his class in high school and at U-S-C where he was studying law. He says if his dad had become a lawyer, he may’ve gone on to become president, but he went into movies and created John Wayne.

Wayne made 175 movies in his career and a Harris Poll released in 2007 placed John Wayne third among America’s favorite film stars. The 100th birthday events for John Wayne continue through today. For a schedule of the events, surf to: www.johnwaynebirthplace.org