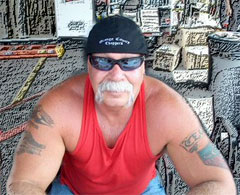 Iowa and ethanol will gain national attention in more ways than one on June 24th. That’s the date for the nationally televised "Iowa Corn Indy 250" at the Iowa Speedway in Newton. The race cars will be running on 100 percent ethanol.

The Iowa Farm Bureau will also introduce a renewable energy "chopper" — a motorcycle. It’s the first cycle built by Orange County Choppers that will run on E85.

"I think it’s the first E-85 chopper ever built anywhere in the world," says Craig Lang, president of the Iowa Farm Bureau. Lang is hoping the unveiling of the OCC chopper will lead to more motorcycles that run on E85. "It depends how much work they had to do to change the engine," Lang says, "but my understanding is that they felt like they could make the changes necessary and the engine would stand up, and it’s my guess that we’ll see more E85 choppers moving up and down the roads and maybe they’ll move over into some of the other motorcycles as well."

The OCC E-85 chopper is still in production and will been seen for the first time on June 24th, when Paul Teutul, Sr. takes it for a spin around the Iowa Speedway. Teutul is the owner of Orange County Choppers and became a reality TV star on the show " American Chopper ".

Following the unveiling on June 24, the chopper will make 40 tour stops around Iowa. Then, the bike will be raffled off with proceeds going toward a charity campaign by the American Lung Association. The tour stops and more information can be found on-line at www.JoinTheRideIowa.com.