You are here: Home / Agriculture / Winner of World Food Prize calls it "incredible" 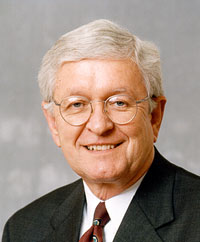 This year’s winner of the Iowa based World Food Prize was revealed Monday at the U.S. State Department. The $250,000 prize will be presented to Dr. Philip Nelson at the Iowa Capitol on October 18th. The 72 year old Nelson has spent most of his career as a professor at Purdue University. "Obviously, this is incredible," Nelson says of the honor, "it’s the ultimate in recognition I guess and I’m very humbled and proud to be the recipient."

Nelson is credited with helping revolutionize the way fruits and vegetables are safely stored and shipped around the world, without affecting the taste of the produce. "That means we can move product into countries and also many of the developing parts of the world can export their product," and Nelson says it can then be packaged, saving a lot money and energy.

The World Food Prize has been awarded since 1986 to scientists and others who have made notable achievements to improve the world’s food supply. The prize was founded by Dr. Norman Borlaug, who won the 1970 Nobel Peace Prize for his work in agriculture.