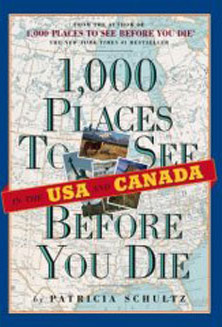 A new book by a best-selling travel author features the Cedar Rapids Museum of Art and the Grant Wood Studio. Museum spokeswoman Katie Giorgio says the facilities and their link to the Iowan-born artist, are part of the book "1,000 Places to See in the U.S.A. and Canada Before You Die" by Patricia Schultz.

Giorgio says they’re in a part of the book called "On Grant Wood’s Trail," which highlights the studio where Wood lived and worked and talks about other places where Wood spent time in Iowa. Giorgio says the book gives them some national publicity. She says it’s very exciting to see that people across the country are recognizing the site and the importance of Grant Wood’s work.

Giorgio says the artist that created paintings such as "American Gothic" is still holds interest today. Giorgio says they have visitors all the time that want to see some of Wood’s work. Will the inclusion in the book increase the visitors to Cedar Rapids? "We certainly hope so," Giorgio says.

Three-and-a-half years ago Schultz wrote "1,000 Places to See Before You Die," and it became one of best-selling travel books ever published. The new book is now available on-line and in major book stores.