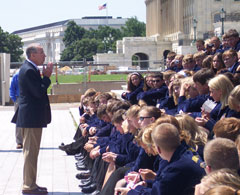 The U.S. Senate is expected to vote today on legislation which Iowa Senator Chuck Grassley says would eliminate workers’ rights to a secret ballot election in deciding whether to unionize factories. Grassley, a Republican who touts being a former union member, says he’ll vote against the bill.

Grassley says, "I’m going to oppose going forward with debate because American workers deserve democrat rights to free and fair elections and a secret ballot is part of a free and fair election." Grassley worked in the former Waterloo Register plant running a punch press machine between 1962 and ’71 and was a member of the International Association of Machinists.

Grassley says: "We had to decide if we wanted to stay in the machinists’ union or change to the sheet metal workers’ union. Our union leaders, of course, were arguing for the side of staying with the machinists and management was arguing for the other side. As workers, we had pressure from higher-ups on both sides." He says he learned important lessons during that time and is thankful for the secret ballot.

Grassley says, "The situation made it easy to see how coercion and intimidation could be used by either management or a union to get a desired result and outcome. In that particular election, by a very narrow margin of four votes, we kept the machinists’ union."

The measure up for a vote is called the Employee Free Choice Act and would force companies to recognize unions after a majority of eligible workers sign union cards. Current law allows the company to demand a secret ballot election, which would be eliminated under the bill. If it passes, President Bush has said he’d veto it.  (photo: Grassley recently addressing FFA members in Washington, D.C.)