You are here: Home / Outdoors / Volunteers clean up Raccoon River 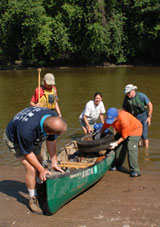 Volunteers have completed a week long clean up of the Raccoon River in south central Iowa. Tom Anderson with the Department of Natural Resources says it’s hard to believe what people illegally dumps in Iowa’s waterways.

"They pulled out tons of material," Anderson says, "from refrigerators to stoves to tires, just unbelievable amounts of things. Any room that you would look at in your home, you would find material that they pulled out of the Raccoon River."

This is the fifth consecutive year that the D-N-R has organized a " Project Aware " river clean up.  Anderson says participation is growing every year and this year, hundreds of volunteers were involved.

Anderson says illegal dumping in Iowa is not only an environmental hazard, it also has an economic impact. He says it costs Iowa almost 13 million dollars a year to clean up, investigate, and prosecute illegal dumping cases.