You are here: Home / News / Five honored with Sullivan Award 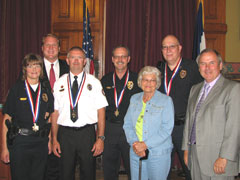 Five Iowans have received the state’s top award for law enforcement officials who do courageous things while they’re on duty. Three Decorah police officers and a fireman received the "Sullivan Award" for pulling 84-year-old Olive Sims from her burning car this past January.

"I just want to thank ’em very much for what they did," Sims says. "I don’t remember anything after I had the accident but I hear that they were very courageous. They saved my life."  Sims is pictured above with Decorah Police Chief Tom Courtney, Police Captain Warren Leeps, Officer Sara Stinson and volunteer firefighter Jeff Ode.as well as Governor Chet Culver and Iowa Department of Public Safety Commissioner Gene Meyer.

DeWitt Police Sergeant Marc Swingle also received the Award of Valor for intervening and preventing an elderly man in DeWitt from committing suicide.

When Swingle arrived on the scene, he heard a shot so he entered the home, snuck up behind the man and disarmed him. "Ultimately I feel very thankful that things turned out the way that they did both for the family’s sake and for my sake ’cause all too many times we answer calls not knowing how things are going to turn out," Swingle says. "This was a call that I had no idea or expected to turn into a gun-related call and things happened to turn out the way they did in a positive manner." The man’s wife has written Swingle a letter, thanking him for his intervention.

The Sullivan Award was established in 1977. In the past 30 years, only 54 Iowa law enforcement officials have won the honor. Governor Culver hosted the award ceremony in his statehouse office.

"This award recognizes peace officers and fire fighters who put their lives on the line," Culver told the honorees and their families.

The Sullivan Award is named in honor of the five Sullivan brothers of Waterloo who enlisted together in the Navy and perished when their ship was sunk.