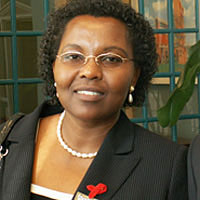 An Iowan who grew up in Africa joined two former state officials this morning to kick-off an effort to get presidential candidates to address global poverty issues. The ONE campaign, launched by rock star Bono, is the united effort of a variety of groups to wipe out poverty in Africa and now the ONE organization is targeting their message to Iowans because the state holds the first event of the presidential nominating season.

Natalie Sugira (photo at right)  grew up in Rwanda and moved to the United States 17 years ago with her husband. Sugira, who now holds a masters degree, was the first person in her family to finish elementary school. "I have the greatest responsibility to speak for those Rwandan women, African women who have never gotten the chance to go to school," she said.

Sugira lives in Cedar Falls and works part-time at the University of Northern Iowa. She told a crowd gathered this morning at the State Historical Building that Americans have been very generous, but there’s more work to be done. "As you go home, talk to you community leaders, to your church leaders, anybody," Sugira said. "You have a powerful voice and I urge you to use it. We can end poverty."

Sugira is a U.S. citizen now and will vote for the very first time in the coming election. "Back home there were many elections, but I wasn’t given an opportunity to vote as a woman, so I hold it very, very precious for me to vote among you all," Surgira said. "I urge you to exercise your civic duty. It is a privilege."

Former Iowa Governor Terry Branstad said the "ONE Vote 08" campaign is calling attention to the scourge of diseases like AIDS and malaria as well as the extreme poverty that exists in other parts of the globe. "This is really a bipartisan effort to fight some of the biggest challenges we face in the world," Branstad said.

The ONE Campaign is asking presidential candidates to commit to doubling U.S. foreign aid from one percent of the federal budget to two percent.

Former Iowa Lieutenant Governor Sally Pederson said providing the basic elements of life — food, vitamins and clean water — can have a dramatic impact on children in Africa. "America is a great nation. We’ve accomplished great things historically," Pederson said. "I can think of no better imprint on history than being the generation that works to save millions of children from senseless death."

Over 20,000 Iowans have already signed up to be part of the ONE campaign. There’s a new website for the group’s latest effort to target presidential candidates: www.onevote08.org .

Bono, the lead singer of the band U2, may visit Iowa before the Caucuses to attract more attention to the effort. Nine presidential campaigns — both Democrats and Republicans — had booths at the ONE campaign event in Des Moines this morning.

To hear Sugira’s comments at this morning’s event, click on the audio link below.