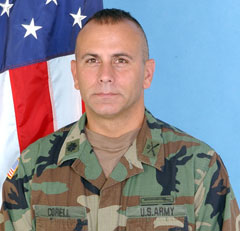 The commander of an Iowa National Guard unit on duty in Iraq says having his son serve in the unit, too, has been both a "strange" and "unique" experience.  Lieutenant Colonel Ben Corell has three sons, all of whom are members of the First Batallion, one-33rd Infantry.

When the unit was mobilized nearly two years ago, his wife asked him to take just one son to Iraq and the elder Corell says 23-year-old Travis — the youngest — volunteered.

"I think I’ve had a unique opportunity to experience this and share this with a close member of my family," Corell says. "…He’s still a soldier in this organization and a lot of times if I have something I need to address with him, such as he hasn’t emailed his mother in some time or he hasn’t called to talk to her in some time, I usually need to go through his First Sergeant to send a message down to have him report to my office…I guess it’s kind of a strange relationship when you have a batallion commander with a soldier who happens to be his son."

There are 15 sets of brothers and another father and son in the unit. After six months of training in Mississippi, the unit’s soldiers have served the past 16 months as security on convoys in western Iraq.

Commander Corell and his son got to eat a few holiday meals together in Iraq. "We had an opportunity to live through this experience together, which is something that will last a lifetime…and I’m grateful for that," Corell says.

Corell, who is 45 years old, is from Strawberry Point. Corell says his other two sons are "generally not the best communications" but there has been a lot of email traffic back and forth from Iowa to Iraq.

"I look forward to getting back home and being able to be in my house with my whole family around me," Corell says. "I think that (opinion’s) probably shared (by) everybody within this organization and the families that are waiting for us to come back home."

Corell estimates the more than 600 soldiers in the unit should be back in Iowa by late July or early August.