You are here: Home / Crime / Courts / Some state troopers get sky high view 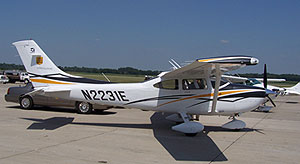 The Iowa State Patrol showed off it’s newest airplane this week in preparation for the special traffic enforcement effort for the holiday.

Paradise says the two screens give all the information a trooper needs, compared to older models that required you to look at 10 to 12 instruments. He says it makes flying easier on the trooper-pilot. The trooper in the air flies over the highway and times cars as the pass painted white marks on the pavement.

He says they use a programmable stopwatch that gives the time and speed, then the pilot calls down to the troopers on the ground who issue a ticket or warning. Paradise says the bird’s eye view makes it easy to pick out violators, and makes more efficient use of the troopers on the ground. Paradise says air traffic controllers take only about five minutes to figure out how fast cars are traveling, and he says "It’s so obvious, it’s hard to believe until you actually see them."

Paradise started out as a trooper, and wanted to try flying. He says that’s not the case with all of the 10 pilots. He says some of the troopers get their private pilot’s license on their own. Paradise says they don’t have to be a pilot beforehand, but they do have to spend three years as a trooper on the ground before taking to the sky.

The trooper-pilots’ view of the state isn’t the only thing that’s different about their job. They work a seven day straight schedule, get two days off, come back work three days, and then get two days off again. Paradise says any day that the weather is good, they’re up flying. The patrol has seven airplanes including the newest model. The new plane cost 349-thousand-500 dollars.