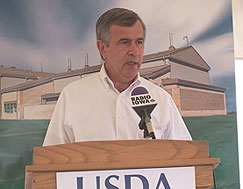 The USDA report released last week shows corn planting is up — including a record amount of acres planted in Iowa. U.S. Agriculture Secretary Mike Johanns says the increase in acres is good, because there’s a record demand.

Johanns says the one thing about planted acres is "nothing is in the bin yet," but he says if there’s good weather and not disasters, there’s a chance to build corn reserves. Johanns says even if the crop comes in strong, there’ll still be a demand.

"We’ll need to do it all over again in 2008, it’s a very tight market out there," Johanns says, "I know this looks like a lot of acres, but the reality is we needed it, and we’re going to need it again in 2008. So we hope it’s a great crop." Some critics say the increase in corn planting will lead to more environmental problems, but Johanns isn’t concerned.

He says corn production is a very sophisticated enterprise these days with the "best varieties ever, the best weed management ever, we have outstanding water management." Johanns says one company has publicly said they anticipate putting out a corn variety that will increase yields in dry areas by 40-percent, which he says is "very, very, significant." Johanns was in Iowa Tuesday for the dedication of the new research facility at the National Centers for Animal Health in Ames.