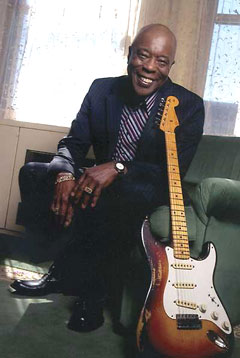 The Louisiana-born Guy turns 71 at month’s end and says he built his first guitar at age seven out of a stick of wood and wires from a window screen.

“I was listening to Lightnin’ Hopkins when my daddy finally got a radio but before that, I was just banging at it. I don’t know. It was just a love. I’m very religious and it was just a God-gifted talent.”

Saying he never learned to say “no,” Guy says he’s tackling six-month cross-continent road tours so his long-time fans — and potential new fans — can hear his style of the blues first-hand. He says his grueling concert schedule mirrors that of another guitar legend, B.B. King.

Guy says, “Me and B.B., we’re not babies anymore. We’re the last two from that area out here trying to take the blues to the people and during the summertime, that’s the time you can go play the outdoor concerts and the ten-, 12- and seven-year-olds can hear this.”

Born in 1936 on a sharecropper’s plantation some 140 miles northwest of New Orleans, Guy grew up in extreme poverty and found pleasure and escape in music. He says he’d steal his mother’s hair pins and splice them into his guitar strings because he couldn’t afford to buy real strings. He also used wire from window screens to pluck out his early tunes.

Guy says: “Down in the bayous where all those mosquitoes nest, we didn’t have running water or electricity so naturally, we didn’t have fans. We didn’t know what air conditioning was. So she’d have to put a piece of screen at the window while she could keep it open at night and keep the mosquitoes out. All of the sudden, in a day or two, they would break so much, she didn’t have any ’cause I’d stripped it all out trying to make guitar strings.”

He says blues music is “being treated so bad” today through lack of airplay, Guy sees it as his obligation to continue touring and playing the heartfelt music the only way he knows how, lest future generations not pick up guitars and follow his musical footsteps.

Guy says, “Blues is so ignored on the radio. Your big FM stations now, only very few, some of ’em play the blues three or four o’clock in the morning and that six- seven-year-old kid is not up listening to that then. My children didn’t know who I was until they got grown and walked into a club at 21 and said ‘My God, Dad, I didn’t know you could play like that.'”

The success he’s seen over the past five decades is wonderful, but Guy says his real reward is reflected back to him by his audiences. Guy says, “If you live in this life and never had a problem, you’re the luckiest man on the planet. I think when people come out to hear somebody play, you see ’em clapping their hands and patting their feet and smiling and jumping, whatever problem you had, whether it was yesterday, last year or year before last, I made you forget it for an hour or so. So that’s the joy I get out of it and I’m just enjoying every minute of it.”

The show is Friday at 9 P.M. at the Iowa Events Center in downtown Des Moines, part of the weekend long Rib America Festival.