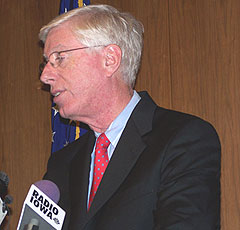 Miller says Iowans will receive approximately 2.3 million dollars — the largest consumer restitution in the history of the Attorney General’s office. Miller says letters are in the mail to nearly 3,800 Iowans explaining how much they can expect to receive.

Miller says there are two parts to the restitution — one for those with loans prior to April 1st of 2003 in a package of 175-million dollars. Part B is a package of 120-million for consumers after the April 2003 date.

A consulting firm was used to look at the various charges on the loans in each group to determine the amount of settlement. Miller outlines the payment to the first group that includes about 2,500 people. Miller says their payment ranges from $600 to $1,676, with the average payment of $697, for those in the “high revenue, high abuse” category.

The part B group has a different payout. Miller says 1,325 people will get money in the group, with the low amount of $119 and the high amount of $1,761 with the average amount of $416. Miller says the consulting group has 90 people ready to help people sign up for the restitution.

Miller says if you have a question, you can go to: www.ameriquestmultistatesettlement.com . You can also call the toll-free number 1-800-420-5875. Miller says you have until September 10th to file for restitution. Checks will be mailed out later this fall.