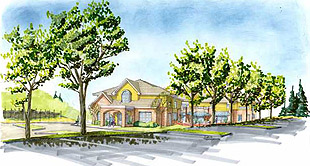 The groundbreaking Thursday for the new American Cancer Society facility for cancer patients and their families featured a surprise announcement. Marcia Holley leads the fundraising effort, and says the surprise came from lead donors Russell and Ann Gerdin.

He announced that they will give another one-million dollars to the project, for a total of three-million dollars in gifts for the facility that will bear their name. Holley says the additional money from the Gerdins, along with a $500,000 donation from MidAmerican, puts them very close to their goal for the Iowa City facility.

Holley says they’re now $800,000 away from their eight-million dollar goal. Four million covers construction, and the other four million is an endowment for operations. The new facility will be called the Russell and Ann Gerdin American Cancer Society Hope Lodge.

Holley says construction will start in august and they hope to be ready for the first guest in September of 2008. Holley says they’re still taking donations to make up the final 800-thousand dollars of their goal.

She says you can go to their website at:www.iowahopelodge.org, or call 1-888-266-2071, extension 7104. The Hope Lodge will give cancer patients and their caregivers a free place to stay during treatment and will be located west of Carver-Hawkeye Arena in Iowa City, near the University of Iowa Hospitals.