You are here: Home / Recreation / Entertainment / "Spamalot" set to debut in Iowa 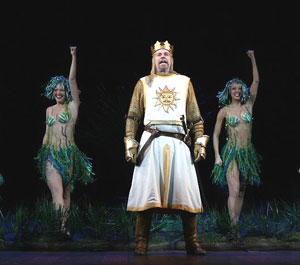 The first Iowa appearance of the Broadway musical "Spamalot" opens next week in the capitol city. The popular show follows the storyline of the 1975 movie "Monty Python and the Holy Grail," but takes several U-turns.

Australian Michael Siberry plays King Arthur in the national touring production and says he was raised on the original "Monty Python’s Flying Circus" TV show. "At the time it came out, it was completely unpredictable and you never really understood what was going on but you kept watching because it was just so bizarre." Siberry says it’s a nightly thrill for him to be playing the royal leader of the twisted stage troupe.

Siberry says: "It’s loosely based on the movie but it’s very much a Broadway musical in its own right. There are a lot of new numbers written specifically for the show. It’s pretty irreverent. It’s bizarre, very funny." While some of the humor has its roots in a decades-old TV skit, he says the stage show is bristling with biting new satire blended with the familiar, frantic antics of the medieval knights.

Siberry says, "It’s basically centered on the plot of King Arthur on a quest to find the knights for his Round Table and on the way he’s charged with the quest of finding the Holy Grail and then asked to put on a Broadway musical, so it’s kind of as silly as it sounds."

While it’s the first time Spamalot’s been in Iowa, it’s also Siberry’s first time in Iowa. While in the region, he says he’s on a quest to visit the Spam Museum, just across the border in Austin, Minnesota. The show’s at the Civic Center of Greater Des Moines July 17-22. For details, visit www.civiccenter.org .