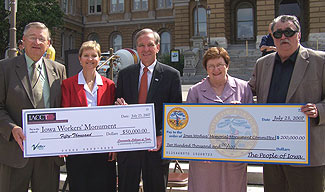 State officials today unveiled plans for an Iowa Workers Memorial Monument, which will be located outside the state capitol building in Des Moines. The committee working on the project has raised over $500,000 for the monument. Lieutenant Governor Patty Judge presented the committee with $200,000 in financing approved by the legislature.

Judge says Iowa is one of just 13 states that doesn’t have a monument to it’s workers, "so we’re going to take a giant step forward and become one of the majority, rather than one of the minority." The Iowa Association of Community Colleges, represented by DMACC President Rob Denson, announced a donation of $50,000 to the monument.

Denson says community colleges in Iowa are providing the trained workers for companies in the state looking to expand and also for companies moving to Iowa. Dave Neal is the Interim Director of Iowa Workforce Development. Neal says total contributions to the project equal nearly $525,000, "and that’s enough to make us a nice monument."

Neal says the actual monument should be in place for a planned dedication on April 28th of 2008. An artist’s rendering of what the monument will look like is available for viewing at www.IowaWorkersMonument.com .