You are here: Home / Politics / Govt / Grassley says Nussle’s confirmation may be held up by Democrats 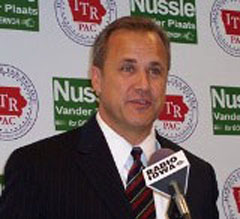 Grassley cites as an example the chairman of the Senate Budget Committee’s vow to hold up Nussle’s nomination not because of "anything wrong with Nussle" but over a dispute with Bush on the budget.

Grassley suggests Democrats in the Senate may hold Nussle’s nomination hostage in hopes of getting Bush to agree to more spending. "I don’t think that’s going to work with the president," Grassley says.

Grassley predicts Bush will merely appoint Nussle to the job on an interim basis, without Senate confirmation, so Nussle could be head of the Office of Management and the Budget ’til the end of Bush’s term in January of 2009. Nussle is being questioned this morning by a panel of senators.