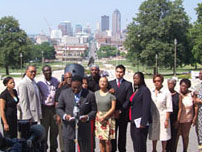 The Iowa Legislature this year provided $200,000 for a project designed to improve the lives of African-Americans in the state. Walter Reed Jr., Director of the Iowa Department of Human Rights, says supporters of the effort have known for years how to address issues facing the black community, but now they have the funding to make it happen.

Reed says he’s often heard the comment, "We’re tired of talking." At a news conference outside the state capitol building, Reed responded, "Guess what? We are too. Now it’s time to move from words to action." The Iowa Commission on the Status of African Americans is launching a statewide effort called the Ongoing Covenant with Black Iowa Initiative (OCBI).

John Campbell, Vice-Chair of the Commission, says he’s particularly concerned about drug and alcohol abuse among blacks. Campbell, himself, was a high school drop out and says he’s a recovering drug addict. He says he was able to get help from the community, "but the fact is, there’s many more people out there that aren’t getting the treatment they need." Campbell says another key issue facing black Iowans is a lack housing.

Campbell says Iowa is experiencing a lot of foreclosures of sub-prime lending in the housing market, "and we know that a significant amount of African-Americans have been unduly or unfairly engaged in the sub-prime market and now face the risk of losing their house." Organizers of the OCBI say they will hold meetings in Waterloo, Cedar Rapids, Dubuque, Fort Dodge, Davenport, Burlington/Ft. Madison, Iowa City, Sioux City, and Des Moines. Information from those community meetings will be used to create a plan of action to take to lawmakers.