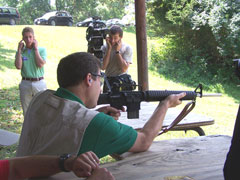 Republican presidential candidate Sam Brownback fired a few rounds at a gun range near Ames Tuesday afternoon to signal his support for the rights of gun owners.

Brownback reminisced about going hunting for quail on his family’s farm in Kansas when he was a boy.  "All I had to hunt with…growing up…was a .410 single shot, and I didn’t get very many of ’em at all with that," Brownback said. "…I wasn’t that good of a shot."

Brownback gave reporters details of his hunting past and present, for example the status of his hunting license and how frequently he hunts to contrast his record with that of Republican rival Mitt Romney. This spring, Romney said he’d been a lifelong hunter and owned a gun, but later admitted he’d only hunted as a teen and went hunting once as an adult and that while one of Romney’s five sons owns guns, Romney does not.

Brownback hosts a pheasant hunt in the western part of his home state of Kansas each fall. "Usually go to Russell, Kansas…I think I’ve missed it once in the last three or four years…I want to be very specific with you," Brownback told reporters. "…And I may pick up and go quail hunting in the eastern part of the state…every couple of years."

Brownback is not a member of the National Rifle Association, but bragged about his lifetime "A" rating from the NRA as the group evaluates his voting record in congress.

Brownback shot at a target that was 50 yards away on the gun range and placed a few shots in the bull’s eye.  Brownback denied he was thinking about any of his political rivals as he took aim.  "A sheer, objective target," Brownback laughingly told reporters.  "No individual.  None of that."