You are here: Home / Fires/Accidents/Disasters / Firefighters learn about fitness training in Des Moines 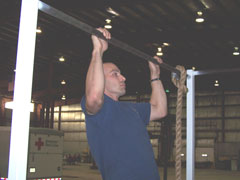 Firefighters from Iowa and several other states are learning about fitness training this week in Des Moines. The 22 fire men and women will take what they learn, back to their departments, to design workout programs for their coworkers. Lynn Manhart from Council Bluffs is one of the instructors.

He says the fire fighters are learning about proper nutrition and how to be personal trainers. Tom Jochum is a fire fighter from Sioux City. "We may go from a dead sleep at night to going a hundred miles an hour fighting a fire," Jochum says, "so there’s no warm up time. It’s very important to keep our bodies in the best shape we can, so we can perform at our highest (ability) without getting hurt."

"There isn’t any one job that you can say a fire fighter does," Kennedy says, "they’re asked to do a variety of things at a variety of different intensities…that’s why they need to be fit and ready at all times." The fire fighters in Des Moines this week hail from Iowa, Colorado, Indiana, Arizona, and Illinois.