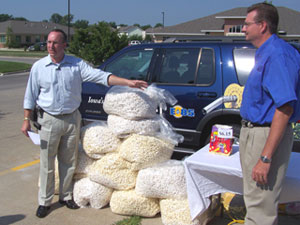 The organizations that promote corn and ethanol fuels today attacked reports that the increasing cost of corn is responsible for big increases in food costs.

Shaw says if the price of popcorn goes up more than one cent, he has to ask who is profiting from the food vs. fuel debate, "Is it the Iowa farmer, the U.S. farmer, or is it somebody in the middle?"

Shaw says they want to point out how the impact of ethanol and corn prices on the increase in food prices has been exaggerated. "Quite frankly this is just a way of talking a little big larger about the whole food versus fuel debate that’s been in the news so much recently," Shaw says, "to try and bring a little bit of sanity to it. And quite frankly, heaven forbid, maybe a little bit of mathematics."

Craig Floss, CEO of the Iowa Corn Growers Association , says farmers are getting more for their corn, but not the amount that’s reflected in the increase in food prices. "Don’t blame the farmer. Don’t blame the ethanol industry that’s helping the farmer be profitable and farm for the market, there’s somebody in the middle," Floss says, "I don’t know whether it’s the supplier, the processor or the retailer. Maybe it’s the added cost of gasoline to haul their product to market. Maybe it’s actually the petroleum industry’s fault."

To further illustrate their point Floss and Shaw showed off 38-and-a-half pounds of popped popcorn next to the five dollar bag of movie popcorn. Shaw says the 38-pounds of popcorn show the difference in what you can buy from a farmer for the five dollars you spend on a bag of popcorn at the movies. Shaw says you can make the same comparison with other food items. He says there’s six cents worth of corn sweetener in a six-pack of pop — one cent in corn costs for each can.

Shaw says there’s a two-cent corn cost in an eight-ounce chicken breast. Shaw says: "I just heard the report that Tyson’s profits went up in the last quarter, compared to the quarter before, 111-million dollars. At the same time that they’re saying that the corn price for feeing their chickens is astronomical and causing them hardship. I find it hard to believe in comparing today to a year ago when corn prices were half of what they are today, that they can make 11-million dollars more than they did a year ago. Somebody’s not getting the whole story out." The two made their comments today at the Iowa Corn offices in Johnston.