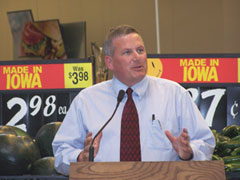 Iowa’s Agriculture Secretary announced Wednesday the state is re-launching its effort to sell Iowa grown products with a new name and an agreement for sales in Wal-Mart stores across the state.

Northey says they want to make sure they have connections with retailers, as retailers say they want connections to producers. He says it’s not just about the products, but making sure they can market the products and get them in front of consumers, whether it’s in smaller stores or Wal-Marts. The old program did a lot to link Iowa grown products with farmers markets.

Northey says they’ll still have some focus on farmers markets, but he says the focus on retailers is different. In the past he says they focused on the products, and ensuring they had products, but now they want to focus on getting the products sold. "In some cases we’ve got folks out there that know how to produce the stuff, they just don’t know how to get it sold, and they want to be able to have a connection to a retailer," Northey says.

Northey says consumer demand has pushed all types of retailers to seek local suppliers. He says consumers want to buy local products, that’s what’s driving the retailers, as "it’s not about price and choice, it’s about local." Northey says big retailers like WalMart also want to have a section that features locally produced products as well. Northey made the announcement at the new Wal-Mart store in West Des Moines in front of a display of locally grown produce.

Linda Kramer owns specialty food stores in Camanche and Des Moines and was part of pilot project that tested the sales of local products in eastern Iowa Wal-Marts. "We are in now over 500 Wal-Marts since April," Kramer says. She says Wal-Mart treated her with dignity and respect and she couldn’t ask for anything more.

Ron Mark, the owner Summerset Wines in Indianola, says the program has already given his business lots of exposure. "Ten years ago I was starting a small winery in my garage," Mark says, "I had a career, but I also had a passion and a hobby. And now I’m in the Wal-Mart stores in 10 different Wal-Marts around Iowa. So, this is one of those success stories that people dream about."

For more information on the program, visit the Iowa Department of Agriculture’s website .