You are here: Home / News / Iowa coach says they have the potential to be a good team 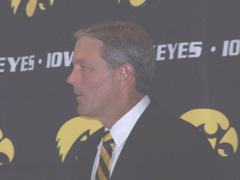 Iowa football coach Kirk Ferentz held his first fall practice Monday and then met with the media. Ferentz says all reports are that the summer went well and they look forward to getting into the practice sessions. Iowa finished a disappointing 6-7 last season, and Ferentz says they have some things to work on.

He says there are a lot of areas with strengths with experience, but several where they are young. Special teams is one are where Ferentz says they’re young and need to improve upon to have a good season. The defense could be one of the strong points. Ferentz says they’re pretty experienced up front with the defensive line and linebackers, and have experience at the corners. He says the biggest question is the safety position, and there are four guys competing at that spot.

On offensive, Ferentz says there’s experience at runningback and receivers, but inexperience at quarterback and the line. Ferentz says there are a lot of things that are going to be interesting to watch and says they "have the makings" for a good team. He says watching the freshman will one of the interesting aspects to see how they develop, and if any of them play. Both Ohio State and Michigan are off Iowa’s Big Ten schedule this year, leading some to say the schedule isn’t very strong. Ferentz says he doesn’t have any control over that.

Ferentz says nobody cried when they had teams come off the schedule that were sub .500, and they didn’t complain about the schedule being tougher. He says even without Ohio State and Michigan last year, they would still be 2-4 in the Big Ten, so Ferentz says his conclusion is that every game is going to be a challenge. Ferentz says they have to focus on putting together the best team they can.

Ferentz says: "You know to win in our conference, it’s not easy. You know, we proved that last year. It just starts out with an appreciation of what it takes to win, and when you lose that, you open the door for bad things." Iowa opens the season September 1st against Northern Illinois at Soldier Field in Chicago.